Archive for the tag “Native Caribbeans”

My quest for self-discovery lead me to south-eastern Nigeria. We are Igbo, a branch of the Niger/ Congo family. The Igbo may be grouped into the following main cultural divisions: northern (Onitsha), southern (Owerri), western (Ika), eastern (Cross River), and northeastern (Abakaliki). Before European colonization, the Igbo were not united as a single people but lived in autonomous local communities. Most of them were carpenters and farmers growing crops designated to them by gender. The men were responsible for yams and the women were responsible for cassava, pumpkins and peppers. Did you know that the Igbo’s are one of the largest distributors of palm oil?

Land is owned communally and crops are shared amongst everyone with their village. Igbo’s believe in an Almighty Creator which they call, Chukwu, and his female companion, Ala the Earth Goddess, who sends Spiritual descendants to protect and watch over the living. Many of them now practice some form of Christianity although there is a sect of Hebrew Israelites who claim ancestry to the son of Jacob. They worship in synagogues and speak “Original Hebrew”, their Mother Tongue.

In roughly the 17th-18th century, the Igbo’s were captured by the Portuguese and sent via slave ships to the many islands in the Caribbean and south America. Once there, they harvested crops and eventually married and spawned children with another indigenous group of Melaninated Peoples: The Arawak’s. From the islands, they were transported by Colon’s men to Maryland and Virginia to work in the cotton fields. A rebellious group, they fought back and often committed suicide in defiance of their condition.

Under the practice of polygamy many Igbo men have more than one wife. The general rule is to never marry a woman and spawn children that you cannot support. This involves providing farm plots to help the women and their dependents make a living. Beyond that unit is the extended family, consisting of all the sons in a family and their parents, wives, and unmarried daughters. The extended family may have anywhere from five to thirty members. Ideally, all of the members of the extended family live in one large compound.

Do you think you could have such a life? One rooted in polygamy?

Here are some Igbo words that we still use today in Creole (island and Louisiana/ Southern states) or Ameriklan Black English:

Redbone = A light skinned person. ” I only like redboned women.”

When I discovered that a certain man I’m lusting after and I have the same lineage, I prayed that we were not related:

My future husband…if he’s not my cousin 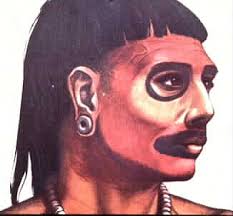