Archive for the tag “Illuminati”

Every once in awhile, a movie comes along that sums up pretty much everything that’s going on in the world. I must admit, the first time I saw They Live, I was too young to fully comprehend what John Carpenter was trying to tell us. All I focused on were the terrific fight scenes.

As my understanding grew and my Spiritual strength became more formidable, I began to watch this film more and more. Last week marked the 20th time I watched this masterpiece. From the opening sequence where Nada tries to look for a job to the terror of realizing that the entire world is living in a carefully manufactured prison, this movie chronicles everything we’ve talked about on this blog.

Can you guess who “They” are? Who or what do you think John was referring to?

In my humble opinion, everyone should watch this movie and have group discussions.

And as always, please do not spend money on white Hollywood buying this film. Free downloads are available or you can go to the local library to rent this spectacular movie.

Posted in Uncategorized and tagged a message to white people, black people and melanin, Illuminati, wickedness in hollywood

Will AmeriKlan Fall Prey to the Zionist’s Propaganda Machine

“Watching the Zimmerman Trial. If he don’t get life ill kill him myself (sic),” said the ironically named “Love.”

One person offered to kill Zimmerman for $20, and several said they would murder random white people.

“If they don’t kill Zimmerman Ima kill me a cracka,” said one person, using a racial term for white people that Mediaite’s Tommy Christopher said is a “proud nod to the region’s history, and one’s own ancestry.”

The volume of threats was so high that a member of the family wrote the Seminole County NAACP, saying blood would be on their hands if Zimmerman was harmed.

The unidentified family member said “the rest of the racists that have rushed” to judge Zimmerman will also have blood on their hands if he is hurt.

“You need to call off the dogs. Period. Publicly and swiftly,” the letter added.

The New Black Panther Party put out a $10,000 bounty on Zimmerman’s head with a “Wanted Dead or Alive” poster and issued calls to murder white people.

“Kill these racist honkeys, these crackers, these pigs, these pink people, It has been long overdue!” the group said in a tweet that has since been deleted.

For me, it has channeled my emotions to an (almost) desirable state. No longer swift to become enraged, I now look at things in a more quiet fashion. Perhaps my brother was the first person who called it. Last year when the news exploded, he said calmly, “This is more than meets the eye. The devil is involved in this killing of a black boy.”

Melanin is a conductor of energy.

Anyone that tells you that melanin (carbon) is NOT needed to sustain life, power the planet and invoke spirits is lying to you. Africa, being the birthplace of ALL life on the planet, holds secrets that we cannot even begin to comprehend. These secrets are not evil. That is the current misconception being propagated by white supremacy. No energy is ever evil. But…the man who channels that energy has the potential to use it for evil. I don’t know how he knew, but my very spiritually-aware brother sensed something was wrong from the very beginning. 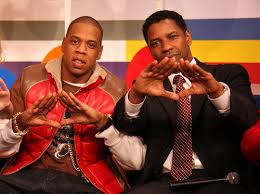 Mr. Rocafella Himself with Mr. Washington

Since the beginning of time, the Jewish Cabal has desired our melanin-rich power. A power that was not meant for them for they misunderstood the meaning of it. Martin, who I firmly believe was a sacrifice, was needed for Zimmerman and his Jewish father to carry out their desires. What those desires are…only time will tell.

When I heard that Martin laid expired in the morgue for 3 days BEFORE his parents were called, I suspected his most potent melanin-rich power (organ) was extracted and ingested:

The “secret” to black God-hood..the reason why fluoride is secretly being administered in our food, drink and air. Since Martin is now in the Spirit realm and cannot tell us what happened, we are left to prognosticate for ourselves. The Jewish Illuminati wish to have “order out of chaos.” They want us to tear each other in half, rip our hearts out and devour the very essence of what makes us hueman. Then, like a white knight in shining armour, they’ll swoop in and “save” us from ourselves…by further enslaving us.

AmeriKlan, a diseased nation founded and made rich in my ancestor’s blood, will fall. There is no doubt in my mind to that fact. My concern is this:

Will the much overplayed hype by the Jewish-controlled media fan the flames of racial hatred into an orgasmic crescendo? Will our emotions over this planned lynching of yet another black family member lead us into a path from which there is no return?

Or…will we awaken and see the traps being set for us?

My Conversation With Professor Griff

A couple of weeks ago, I called Public Enemy’s Professor Griff to get his take on the state of black affairs. Prof Griff, never one to be shy, told me point blank that some black folks “just ain’t gonna make it.” Knowing his background in the music industry and his extensive knowledge of the Illuminati, I asked him what can be done to help our people.

Griff explained that there are forces here on Earth that work beyond our control. Evil is very real and some of us are already too far gone to be saved. Unfortunately, that included some of our black family members. Blacks have been brainwashed and beaten down into believing the worst about themselves. All these people need is a little money, a new car or just a flimsy promise of a new book or record deal, and it’s very easy to turn against the family. I told him that I was trying to reach out to my people but was getting resistance and apathy. In fact, I had some blacks tell me on my blog that I’m racist, paranoid and “stirring up trouble.” I told him of my frustration and my feeling of helplessness. He paused for a while then spoke.

“Harriet Tubman always said she would have been able to free more slaves if they knew they were slaves.”

I smiled over the phone.

Griff asked me if I’ve heard of Zbigwiew Brzezinski. I said that I did not. He then recommended this:

I admit that I’d never heard of this man. He explained that the Wizard of Oz never reveals himself. What you usually see are his puppets. I nodded slowly, understanding his statement. He asked me what I thought of the Illuminati. I told him that it’s fascinating and a bit surreal however, while believing that evil is real, I never buy into anything with absolute totality. He explained that true intelligence comes from keeping an open mind and finding truth for yourself.

I told him that I’m researching Chemtrails, GMO’s, Fluoride, MK Ultra, etc…He chuckled. “Oh…well…have lot’s of fun with that. Once you begin to uncover what they allow you to know, you’ll quickly realize that it’s just the tip of the iceberg.”

I questioned if he believes in the 2012 Doomsday Prediction.

He told me that Doomsday is already here.

He asked me to study Maat. And Drs. Afrika and Barashango. And if I’ve ever been camping. I said not really. He recommended learning to live “off the land with no electricity and heat.” For some reason that got me very awake and sober. “I do not mean to cause alarm, sis, just preparedness.”

After we hung up, I willed my mind to think clearly and rationally. But then I remembered that evil defies clarity and rationale.