Archive for the tag “depression in blacks”

The Miseducation of The Negress 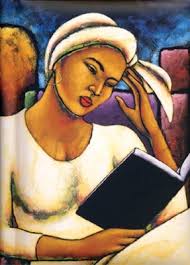 “…Every time you see yourself in the  mirror, whether you’re black, brown, red or yellow, you’re seeing a  person who’s a serious problem for the United States, because they do  not want you here” — Malcom X

I say this with no ego: School came easy for me.

Coming from the Islands where our education system was so rigid (and home-schooling practices were equally rigid), I surpassed many of my white counterparts in the European Mis-Education system much to the dismay of my white Jewish teachers. I was taught, incorrectly, that white education would be the key to my success in a country founded in my blood. I was astutely aware of how my near 4.0 GPA caused my professors mental anguish. I remember the way this one particular white female Jewish professor would frown every time I answered a problem swiftly and correctly. Her thin, lipsticked lips would crinkle at the corners and deep lines marred the center of her brow. My young and innocent mind couldn’t fathom that what took place within the confines of her classroom would pale in comparison to the real world that lay waiting for me.

Perhaps the first time I knew that something was amiss was the day that I innocently stated one day after class that someday, perhaps before my 18th birthday, I would become a famous writer. My Jewish teacher looked at me with great amusement and told me to my face that “Niggers can’t write.” With a sharp intake of breath, the notion of my doom, despite my ambitions, stunned me, hurt me and made me fearful of myself. I tried to understand why “Niggers can’t write” but I could not. Was it a defect from birth that would stunt my abilities? Even now, with my children’s novel and my soap company, the white chip deeply lodged in my brain whispers to me, “You’re nothing but a failure. Fuck you, you black, dirty Nigger. You’ll never make it.” I fight against it daily and sometimes, at my lowest moments, when the white voice inside me is too strong, they win. I acquiesce into depression and take to my bed.

When college came, I got such a high score on my entrance exam with no preparation, it aroused immediate suspicion by the dean and I was summoned into his office for a “conference.” I remember the way he and another white woman hung on to my every word, desperate to hear some reasonable explanation or perhaps a clue as to why I surpassed all other students in a predominately white class. And when my white professors learned that I had no formal training in my writing ability, plagiarism rumours began to circulate. How can it be possible to write “from my soul” and receive A’s when white students studied 2 hours daily and barely passed with a “C”? I was confused. I didn’t understand what was happening and believed it to be my fault. I then made a critical error one day that began my journey into my mental breakdown: I would try harder to appease them. Clarke, Amos, Woodson and many other black educators were forsaken for Yeats, Hemingway and Shelley.

In their company, I only spoke of approved topics, approved movies and tried hard never to appear too “black.” My complexion relaxed them, if only slightly, but my natural hair, which grew long and terribly wild looking, intimidated them. They did not know if I was a “safe” black or if I was comfortable in my blackness….which made them all the more uncomfortable. They hop-scotched from one decision to another and I witnessed it all. Inside their realm of the education system, where their ideas and inventions were talked about and glorified, I was slowing dissolving into madness. I knew that my ancestors built wall street, the white house, railroads and invented all, and I do mean all, of the things we now take for granted, like the traffic light. I wanted to yell, “Hey, my 7th great ancestors created that in The Rainforest!” but kept silent for fear of their denial and anger.

When the workplace and I become intertwined, my state of near insanity was eminent. God gave me a natural ability to learn things with no training, just simple observation and I would perform tasks in 3 days that would take them 3 months…and they hated me for it. I was set up for failure at every turn and if not for the aid of The Creator, I would not have completed my 90 days probation period.

I was completely and entirely unprepared for the level of animosity that I would face at the wicked hands of my oppressors. Lies were told, stories were mixed with fiction, tales were embellished, files were “accidentally” deleted and I, the lone African in many of my departments, bore the brunt of it all. I would duck into the ladies bathroom to weep on many occasions and one day, I caught sight of myself in the mirror. With a tear-stained, red face and a swollen nose…I gasp! So that’s the problem!

This hit me like a ton of bricks. I wasn’t a nigger in the islands. I was black. From God. From my parents. I was proud and almost arrogant of my Carbon. So what happened to me? I went from being one with Jah, to being a lowly, good-for-nothing dog. But, surely my education mattered!!! After all, I graduated at the top of my class despite an Italian woman’s attempt to destroy me. I was well read. Well spoken. Educated with a degree. And medical training. Didn’t that matter? Didn’t that count for something? Many whites could not and did not have the ambition to achieve what I have achieved at the age of 25. I was told that their schooling was the key to my happiness.

Somebody lied to me.

Being black in the entire world, created under the illusion of white supremacy, means you are ignoble. You are worthless. And all your attempts will be futile. Ideas will be stolen, you’ll be cast aside like yesterday’s garbage and not one person will come to your rescue.

Nothing you accomplish will ever be good enough, fast enough, competent enough because you, in the system of white supremacy, are not enough. Your attempts at success will be mocked and trivialized. Your attempts at freedom will be marginalized. The white system will offer you crumbs from time to time, while they feast and gorge themselves fat and rotund. You will salivate for those crumbs in a desperate attempt to have a belly-full of desires. But that day will never come. Not with them as the Master Chef. ALL things that make you who you are will be rendered useless to society. Yet, society could not function without you. It is this paradigm that nearly took my life.

Today, my true Spiritual education continues daily. I read my books now. I watch Mystory now instead of Theirstory. I meditate with Jah, ask for direction from the Universe, which is female and all powerful, and I have begun the painful process of re-learning everything I thought I knew about living in a white world in brown skin. I continuously grow each day. I stagger at times at the blatant evil that spews from the cold, flinty gaze of my enemy, but when all is said and done, I’m grateful to be black…giver of black life, producer of black melanin, ancestor of black Ra, my grandmother’s black spirit and made with the Carbon of the Black Hole. Whiteness may have the privilege…for now…but blackness will always have the power. I’m just a little sad that it took me this long to realize it.

The Secret Link Between Depression, Smoking and Asthma

…and has been sold to us under the brand name of Scotine, an anti-depressant!

Both major depression and depressive symptoms are associated with a high rate of nicotine dependence, and a history of major depression has an adverse impact on smoking cessation. The main objective of this study was to investigate whether continuous ingestion of nicotine affects indices of depressive behavior in the laboratory rat.

B-b-but…wait a minute! You mean to tell me that doctors are prescribing you drugs to get you hooked on nicotine under the guise of treating your depression symptoms? Yes. That’s exactly what it means.

Cigarettes have been cleverly marketed to our community since…forever:

Big Tobacco used to give them away for free in our neighbourhoods! Our community is dying, literally, from some form of mental illness, like depression, and we rely on our doctors to prescribe us medications, like Prozac, Zoloft and Welbutrin that will help us…not get us hooked on nicotine or other substances. This vicious cycle leads us down a desperate path with no one we can truly trust. It’s herbal remedy time.

For asthma, you can take:

Parsley (my brother will be thrilled!)

For depression, you can take:

And, if you are suffering from depression, PLEASE STAY AWAY FROM WHITE SUGAR!

Forget Prayer, Get a Shrink

{This post is based on the Essence article which I linked here : http://www.theroot.com/buzz/you-dont-need-prayer-you-need-therapist}

I’m a firm believer in the power of prayer. I’ve seen not only the joy of receiving God’s answer — even if it didn’t show up the way the person doing the praying thought it would or should — but also the cathartic process of connecting with the Lord and hashing out the emotions that go along with those deep, sincere, pleading-for-a-change kind of invocations. I’m also a firm believer, however, in the anointed calling that God has placed on some people to be therapists, psychologists and licensed counselors to help heal others much like neurosurgeons and cardiologists do.

One out of every 20 adults experiences some form of depression in any given two-week period. Hypothetically, that means in your office, your sorority, even your congregation, at least one person is struggling right now with symptoms that may be too deeply rooted to just be prayed away. Depression is the leading cause of disability in the country, particularly for women in their 30s. To complicate the issue, as if it needed more complexity, somatization — which, in the language of everyman, is physical ailment that crops up because of mental health problems — shows up at a rate of 15 percent in our community compared to only 9 percent among White folks. There’s a trickle down affect that proves what goes on in our heads has a direct impact on the rest of our bodies. Since we already have a higher rate of just about every disease under the sun, that makes our holistic health that much more serious.

Do you believe this hypothesis?

Why should blacks trust any mental health professional, especially a white one, with their troubles?

{Thanks again to HunglikeJesus for a great topic}

Posted in Somethings wrong with the world, Uncategorized and tagged America, Anger, blacks and mental illness, blacks and suicide, depression in blacks, Racism, self-hate, the power of prayer