Archive for the tag “celebrities” “If I could marry a celebrity, I’d marry…” If Idris is busy, I’ll take him:

But…I’ll probaby have an illicit, sleazy, dirty affair with him:

And him…(on weekends when my husband is out of town and the kids are at grandma’s): 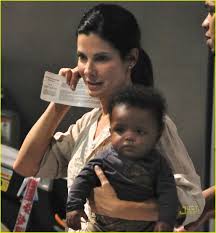 I can keep going but you get the idea.

Frankly, I’m sick of it. Why are black children such a “hot commodity” with white women?

2. It’s great way to get attention and further your career.

Of course this hurts the black child in more ways than one:

1. By taking away the black/brown/yellow/red child from his/her Own Peoples, you confuse the child as to where they belong in reference to their race.

2. Since all white people are apart of the system of white supremacy, they risk mentally harming the Coloured child by placing them in an unsafe environment.

4. What will you say/do when the child is called a nigger for the first time?

5. How can a white person teach a Coloured child about black/brown/red/yellow pride?

Guys, I am adamant about this fad and frankly I’m insulted by it!

We’ve always been property in one way or another. This…this is just too much for me. Yes, yes, I know that there are many of you who will cry and scream about love being the only thing that matters but this is me you’re talking to. Get real.