Archive for the tag “black music” 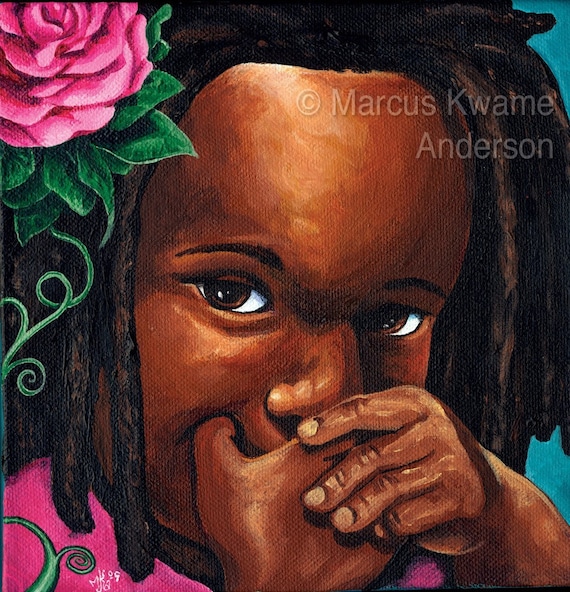 I was looking for some African Art and stumbled upon Marcus’ website. After looking into the eyes of this sweet angel, I wanted to know who the painter was. I contacted him and was delighted that he responded. 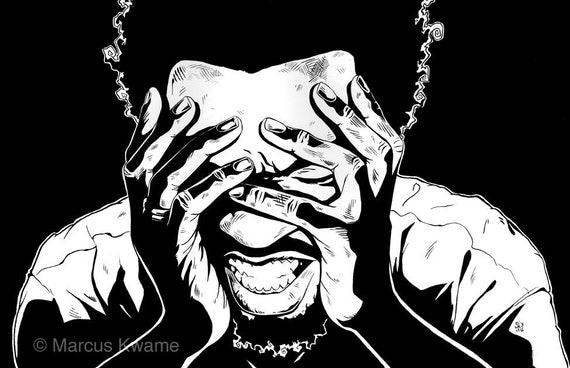 It’s very rare that an artist makes you feel life pulsating through the screen. This painting, “Makes me Wanna Holler”, speaks to me on more ways than one. I questioned him on his inspiration:

I feel like creating art wasn’t necessarily a choice. I’ve been compelled to create art of one kind or another since I was very young. I have a lot of ideas and I’ve always been drawn to creating. I find art to be therapeutic. I’ve been making art since I could pick up a crayon. I colored and drew like most children, but I never stopped. In grade school I wrote and illustrated stories, in middle and high school I created comics and paintings. Now I teach art, paint, draw, make comics and a do freelance work.

I’ve always been inspired by artists who used their creative voice to speak on issues. I draw a lot of inspiration from music. Bob Marley, Nina Simone, and Peter Tosh are just a few of the musicians that inspired me. The way that they incorporated social commentary into their work showed me that I could make art and say something at the same time. I’ve been inspired by many visual artists. Honestly, I find inspiration everywhere: in people that I meet, nature, the city, my children, and the wealth and beauty of the African diaspora. Inspiration is everywhere if you’re paying attention.   Marcus K. Anderson

If that doesn’t make you swoon, nothing will. Please support this very talented artist by spreading the word about his shops:

We have all that you need to uplift the black community. Art, T-Shirts, Greeting Cards, Food, Jewelry, etc…Please spread the word and buy black and black only! Instead of buying random art from big box stores, support those that look like you. Buy Black!

Ummmm…Kushite Prince sent me this and asked me, “What happened to India Arie?”

“The pressure of being a dark-skinned, black woman with African features in white Hollywood.”

Guys, do you think the sting of losing the role of Nina Simone to Zoe Saldana pushed her over the edge? And why is it that only black females are targeted? Look at my future husband:

*takes a minute to swoon*

He’s dark, right? And no one is badgering him.

As I walk down the street of my neighbourhood one day, I lock eyes with a tall, handsome black man walking with his white wife. His pants, low-slung around his buttocks and his extra-large sweatshirt and work boots gave his boyish good looks a menacing echo. He pulls her closer to him, wraps a protective arm around her waist and smiles cockily at me with beautiful white teeth as if to say, “Look what I have.” I know that smile. I’ve seen it a million times and, shockingly enough, I know why he made the gesture. The woman wore an air of arrogance about her. She too is in on the game. But for her, the ball is totally in her court. And she knows it.

Since the time of physical enslavement, the black man has been:

A stud, made to breed with any black female fecund…even his own daughter

Targeted for extermination by slave catchers…now called The Police

Dumbed down in school…if he even went to school

Experimented on and castrated

And a killer of his own race…by ways of the FBI selling guns to young, disenfranchised men with nothing to lose.

Since writing my “Black Female Role” post, I’ve thought long and hard about what to say regarding my black man and his plight; And his plight is a delicate one. The black man, the other half of the black woman’s Spiritual complement, must resist temptation from the perils of a white dominated society where he is intentionally set up to fail and accept his role as a protector and educator of his black family unit.

Perhaps an overprotective mother and an absentee father is to blame. Perhaps it’s the white mis-education system that prepares him for prison. Perhaps it’s the drugs being administered to him in school that wets his appetite for illegal substances. Perhaps it’s the media’s depiction of him as a glorified, piece of chocolate flesh who fulfills carnal fantasies…or perhaps it’s his own disillusionment of what he’s supposed to be fighting for. The black male is born in a society trapped between wanting to be the man, husband, father and role model the Creator wants him to be and having to decide very early on in his life if those noble ambitions are worth dying for. The system and the Evil predators that formulate the system are deathly afraid of any black man who shows love for himself, love for his woman and love for his race. Add intelligence to the mix and he is automatically targeted for termination. That is why they have spent trillions of dollars turning his strength into feminine weakness via the introduction of homosexuality, his passion and fierceness into thuggery via criminality and his sexual virility into vanilla-flavoured debauchery by allowing him to indulge in destructive fantasies.

The black man, who was put on this earth for 2 reasons; to protect his most valuable asset, his woman; and to plant his seed to continue his genetic lineage, has been attacked, cajoled and removed so his task, if he chooses to accept it, is more difficult than ever. As the world awaits the black woman to rise up and assume her role, the black woman is also waiting for the black man to rise up and join her in their task for planetary leadership. She cannot be successful without his support, his love, his acceptance of her and his desire to protect her above and beyond anything else.

How can he accomplish this task?

By accepting who he is, why The Most High created him first as the Original Man and focusing his Spiritual energies on what he was made to do: Protect and love his black family by any means necessary.

Michael Jackson Tried To Tell Us The Truth

Guys, this weekend I shall be snowed in. A blizzard is coming my way but no matter…I have plenty of firewood and hot tea. I am in the process of promoting 3 young Africans! Yes!!! Please keep them coming. If you have anyone that has a business that needs black promotion, send them my way. Having said that, writing up their “Introducing…” post will take some time. So here’s a new Open Discussion Post.

Just the Two of Us

This song has *ahem* special meaning…hehehehe

If Jah is Standing By My Side

Which One Sung it Better?

Kushite Prince has a great new blog on black survival. Please check it out and support his efforts to help the family.

Here’s a taste of what you’ll read:

The individual of Afrikan descent who may be designated as demonstrating a
wholistic self-concept is one who exhibits the following characteristics:

– He has consciously and unconsciously rejected White racist stereotypes of
Afrikan people as fact.
– He does not reactionarily define himself but proactively defines himself in
terms of his Afrikan culture, heritage and reality, and in terms of the reality
of his personal and social experiences and expectations. Thus he defines
himself in ways which permits him to assume an authentic, coherent, cohesive
Afrikan and human identity.
– He builds his identity on both intrinsic and extrinsic factors; on his
association with Afrikan-centered persons and those who respect his Afrikanness;
on consumption and cultural symbolic displays which uplift him and his people
and maintain their mental and physical health and welfare; on pro-social
behavior and dress.
– He develops and appropriately transforms his attitudes, associations,
perceptions, ways of defining himself and the world which permit him to directly
comprehend and confront reality and to take personal responsibility for helping
to rectify his, and his people’s problems as well as problems common to
humankind.
– He is ‘centered,’ balanced between a wholesome drive for self-preservation and
continuing positive evolution and a wholesome drive for group preservation and
evolution. His love of self and group are synonymous and he maintains a healthy
sense of social interest, responsibility, and priorities. He recognizes that
his personal health and powers are finally dependent on the health and power of
his ethnic group. The priorities of his ethnic group come first. He is
dedicated to the liberation of his people from bondage of all types.
– He is motivated by his self-determined needs based on accurate, realistic,
self-examination; self-knowledge and self-acceptance; on self-actualization,
task-oriented problem-solving drives to resolve conflicts which bedevil him and
his ethnic group.
– He is realistically self-confident. He does not doubt his capacity nor that
of his people to equal or surpass the accomplishments of others. He feels that
his talents are best displayed and utilized in the service of his people and
against domination by other people.
– He realizes knowledge of truth and the continuing, joyous pursuit of knowledge
are liberating. He is deeply aware that Afrikan peoples have the longest
scholarly and intellectual tradition, that scholarship and intellection are
Afrikan traditions and inherently Afrikan. When he practices mathematics,
science, philosophy, etc., he celebrates the best of Afrikan tradition and
through such practices maintains Afrikan cultural identity and consciousness.
He recognizes that there is nothing foreign or alien about his pursuit of the
highest level of cognitive competence of which he is capable.
– He avidly seeks self-knowledge, knowledge of his and other cultural groups;
knowledge of the world and of reality in general. He seeks to be productive and
contributive. He continues to integrate into his personality and self-concept
an honest knowledge and self of ethnicity. The infrastructure of his personal
and social identities consist of a resolute and unassailable sense of ethnic
pride, ethnic and human connectedness.”

A Warning To The Family

Posted in Somethings wrong with the world and tagged black love, black music, Hitler's Final Solution, Racism, supremacy, survival for blacks, the black community, The end is near, white terrorism

Let’s take a much needed break and have some fun…

If I could be any musician/singer/songwriter, I’d be…

Who would you be?

Have I ever told you that Jah speaks to me. He “tells” me what to write and what words to use to reach out to my readers.  On Sunday, I was outside, tending to my garden, soaking up the sun when I asked God to give me another idea to discuss and evaluate. Then, out of the blue, HungLikeJesus contacted me and asked me to watch a video and possibly use it on my next topic.

The Most High sure does work in mysterious ways.

1. What messages did you get from this.

2. Are the videos that show “Coonin’ Time” to be blamed for the breakdown of little black girls and boys’ morale and self-image? If so, where are the parents?

3. Why aren’t more videos like this one in the mainstream media? Is it because the “need” isn’t there or because blacks aren’t interested in this type of hip-hop?

One of my favourites:

For my black sisters to brighten your day…