Welcome To The Matrix

“The Matrix is everywhere. It is all around us.” (One of my absolute favourite quotes.)

My last post regarding the real identity of Native Americans, inspired such vitriol, indignation and affirmation I knew at once it must be for a good reason. People emailed me telling me off, calling me names, demanding where this “new” information came from and telling me if I don’t like it here, maybe I should go back to Africa. Only truth can inspire such hate.

Last night as I was drifting off to sleep, I had a thought. It’s the same thought I’ve had on and off for about 20 years when I was becoming awake and realized that this world we live in is manufactured and nothing that yurugu tells us is real. Nothing they say can be trusted and only reason and logic stemming from my third eye and inner ear can lead me to my truth.

I used to watch with amazement a TV show called Antique RoadShow.

Whites would swarm these “professionals” claiming to be experts on rare antiques and tell them, with much delayed, heart thumping anticipation, if the Henry V hankie they found in their mother’s basement is worth ten million dollars. I began to realize how much whites prize the past and make much sacrifice to conserve it…as long as it benefits them.

Then I began, thanks to Neely Fuller, to question a topic that would haunt me for many years.

Where are the slave ships?

Where are these ships that housed my kidnapped, raped and tortured fore-parents from Nigeria?

Don’t tell me that whites, who love reminiscing about the hundreds of millions of blacks that they brutalized on a daily basis for pure shits and giggles, didn’t keep a tiny piece of the slave ship in some heavily armed museum so they can sigh and groan with pleasure about how good it was when niggers knew their place.

Where are the slave ships????

And why haven’t we seen them? Why are they not readily available for Tourism in Charleston?

Why is it that they only picture I’ve seen is this one? 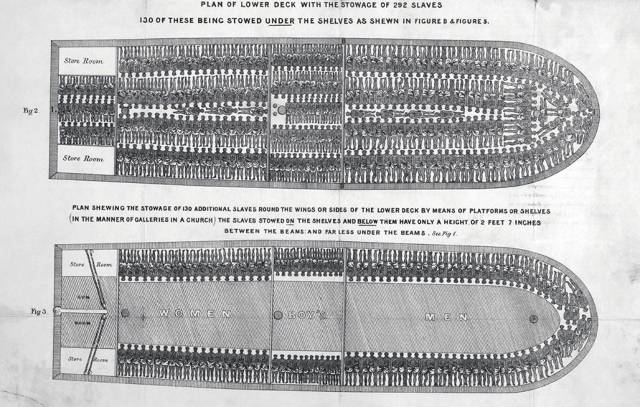 I don’t know about you, Black Family, but logic tells me that:

Whites, who love money more than their own children, will piece together anything that serves their purpose just to make a buck.

Whites, who choose destruction over togetherness, will go to any lengths to preserve their past as (temporary) victors over huemanity.

Whites, who wrote their-history as lies to confuse us, will continue lying for as long as it takes to preserve their stranglehold over this planet.

Have you ever wondered the same?

Where are the slave ships?

Posted in Uncategorized and tagged slave ships, they live

20 thoughts on “Welcome To The Matrix”