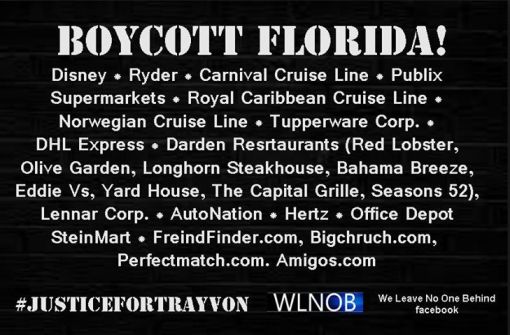 In protest of the Zimmerman verdict, and all the victims of white supremacy that you don’t hear about, I am writing a post urging ALL black people from all over the world that read my blog to help me in a simple yet difficult task. White people have consistently demonstrated that they only understand and respond to 3 things:

You are not powerless in this system built on illusion. Your power can be demonstrated by the one thing I’ve been talking about for an entire year:

Abstain from spending money in their stores and allow their companies to shut down. Ever since we’ve been locked out of the game with the denial of our rightful 40 acres and a mule (I’d actually prefer a mare…but that’s another story), we’ve been dependent on the very system that hates us for food, shelter, jobs and basic survival. Those of us that have fought and clawed to gain entrepreneurial freedom are being pushed out by other non-black ethnicites that sell inferior products at a cheaper price.

Why are we falling for this same trick over and over and over…? Because we do not understand military science. The simple science of any warfare begins not with the fist, but with the mind. Change your mind about supporting black owned businesses and change the game of warfare. Florida’s nearly all white jury allowed this man to walk free because black life is:

Not to be respected

And treated with apathy.

We are the only ones on this planet that WILL NOT understand, that refuses to admit, that you cannot FORCE, SHAME OR BEG your oppressor for sustenance. Our dependence on them is what’s aiding their survival. We must regain control of our own tightly knit communities and shop within our own network. Show your power in a system that tries to render you powerless! AmeriKlan is, without a shadow of a doubt, the most racist, evil, diabolical, perverted, corrupt country in the known universe. They don’t give a damn about us! But…………. They want and need your MONEY in order to survive.  Boycott them! Shut the fuckers down! Boycott the entire state of Florida and DISCONTINUE  buying anything that comes out of Florida like :

These fuckers don’t give a damn about us! But they will make a “Trayvon” T-Shirt and sell it to us for a profit! We built this country from the ground up and they’re making money off of our blood…and they have no respect for us as a race of people. And the worst part is, in my opinion, we give it to them…freely…and with smile. Boycott them! Refrain from buying any products from them. Shop in our stores and ours alone! There are millions of black owned companies out there. Just type in http://www.blackownedbusiness.com, or any other “black business” search, and see for yourself what a segment of black businesses look like…in this country alone. Why not share the wealth with Trinidad, Haiti, Nigeria, etc??? They need you too. End this now! I cannot do this by myself. Please pass this around to as many bloggers as possible. Get the word out. Help us to end this evil, oppressive system once and for all. Shop black and black only!

{After this post, the Negress needs a break. I’d like us to come together and think of a way for us to start a bartering system of clothes, shoes, children’s apparel, blankets, etc…so we can CUT OUT the middleman. Where there’s a will, there’s a way. No more excuses…}