How White People Perverted the Swastika

A friend of mine, who recently came back from India, brought me as a souvenir a red headband encrusted with a gold thread, a Hindu devotional object. After a closer examination, to my great surprise, I found it to be covered with tiny swastikas. Forgetting completely about the true meaning of the sign and looking through the prism of my Polish historical heritage I was shocked (and at first terrified) with my discovery. So how did it happened that this ancient multicultural symbol of ‘good luck’ has such horrid and evil connotations in the modern Western culture?

Signifier: swastika is a symmetrical cross with its arms bend usually at right angles. In geometric terms, it is known as an irregular icosagon or 20-sided polygon.

It describes a lucky object or a mark denoting good luck. The symbol appears in many ancient cultures with different meanings attributed to it: image of the supreme god, solar symbol, symbol of fire, union of the male and female sex, harmony. It is a historical sacred symbol in Eastern Religions. In Buddhism swastika represents eternity and it appears on the chest of some statues of Buddha. In Hinduism it represents Sun’s rays, upon which life depends. As well in Christianity swastika is used as a hooked version of a Christian Cross and appears in many ornaments and church decoration.

The swastika was adopted as a symbol of National Socialist German Worker’s Party (NSDAP or the Nazi Party) in 1920, and in the 1930s, after Adolf Hitler’s rise to power, it became a commonly used symbol of Nazi Germany. It was during the Second World War when in many cultures worldwide the connoted meaning of swastika changed. From the universal genuine sign it suddenly became a racist ‘Aryan’ emblem, a symbol of the Nazis and their atrocities. “The Nazi movement has become such a strong sign that many of the cultural signs to which it linked itself were retooled to be entirely identified with that movement. This re-purposing affected the swastika.”

In 1950’s French philosopher Roland Barthes broadened semiology by the term ‘myth’ which he described as “a peculiar system, in that it is constructed from a semiological chain which existed before it: it is a second-order semiological system. That which is a sign in the first system, becomes a mere signifier in the second.” As the sign becomes associated with a concept, it becomes a signifier and produces a second sign, which is detached from the original meaning.

So following this method: the swastika (sign) is a crooked cross (signifier) and in pre-Nazi times symbolizes ‘luck’ (signified); when Hitler decided to use it as a symbol of Nazi Germany (sign) swastika (signifier) became the symbol of hate, racism, evil etc. 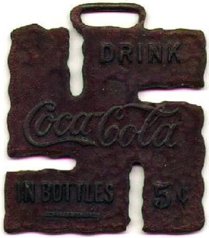 54 thoughts on “How White People Perverted the Swastika”