Parasitism is defined as “the relation between two different entities (Black and white) in which one lives off the other, eventually destroying it — Emile 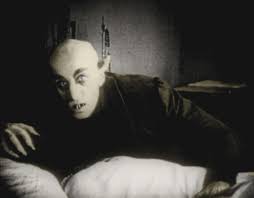 “Have you noticed the barrage of monster films and shows on TV? What do you think the hidden message is?”

That was the question proposed to me by a good, conscious buddy of mine. A few weekends ago when I was snowed in, I cuddled up next to the fire with my book, Yurugu, trying to innerstand this madness that I was forced into. The phone rang and my blogger friend called to chat. She acknowledged the frenzy of Twlight, Vampire Diaries and the English remake series Being Human. She was baffled at the dark turn tel-lie-vision has taken, even going so far as to put a reality show about a man who collects weapons of torture and gleefully displays them. The question reminded me of the talk I had with Mr. Fuller when he beckoned me to start watching more tel-lie-vision and film.

“Now…you see…I don’t want you to start watching TV just for the sake of TV. But whites tell you the next phase of your destruction through the media. They also tell you who and what they’re about. They’ve done it for decades. Flip Wilson was an early form of Tyler Perry’s Medea. Do you know him?”
“No I don’t, sir.”
“Well, he started the whole ” black man dressing up as a woman” thing. Good Times, Sanford and Son and Fat Albert was an extension of the minstrel shows. You gotta start watching it to catch the hidden clues…see what I mean?”
Yes. I believe I do.
In the late 1300’s, an illness, now known as Porphyria, caused many Eurasians living in the snow-capped Caucus Mountains to exhibit an extreme sensitivity to light. They also developed anemia. This inability to produce healthy red blood cells was coupled with coolness of flesh, extreme pallor and a mild form of insanity.

In desperate need to retain life-saving nutrients, like iron, they resorted to killing animals and drinking their blood. Animal blood then opened the doorway to human blood and child sacrifice, especially the blood of young children as they believed it was a more potent form of iron. Word quickly spread of their cannibalistic practice and it was then that the tentative legend of the Vampire Bat Peoples began.
Bram Stoker, an Irish novelist, solidified that myth of Dracul  in 1897 with Vlad III, the Prince of Wallachia; a Romanian Count/ Warrior who cursed Christ and rose from the dead to join his beloved Wilhelmina Murray. Prince Vlad, later known as Vlad the Impaler, acquired the nickname because he would impale his victims on a wooden pike, allowing them to bleed out for his kingdom to see. Prince Vlad, purely by romantic and incidental folklore, became synonymous with the handsome, fang-tooth, genteel, blood sucker we know today as Vampire.
Fast forward to modern-day cinema and we see countless tales of pale-skinned, devastatingly handsome men and women who must devour the blood and flesh of the living in order to survive. Prince Vlad, the most infamous of all creatures of the night, sleeps covered in soil, a dark substance, to gain strength and regenerate his “human” appearance. The Vampire Diaries, Buffy the Vampire Slayer and Twilight imploded in the teen/ young adult fantasy-romance-horror genre and sparked a new interest in the “goth” culture. The European has also given us the Zombie, the Werewolf and the Sea Creature. These 3 creatures have one thing in common: An insatiable Blood/ Flesh/ Brain thirst and they are “darkened” through the development of fur, blood, decayed flesh or seaweed and moss.  Could there be a hidden message in the implosion of such films like, I Am Legend, Underworld and Lord of the Rings which have hidden esoteric meanings?
As I began to study the human force of energy, also called The Chakras, I learned that Africans possess a complete and indeterminate level of Ba (the soul of a hue-man).

We are able to absorb ALL energies from the planet! Yes, my family, you are the only Hue-mans on earth that can pick up on earth, air, fire and water. We unfortunately pick up on Pain, Demonism, Despair and Rage. With the correct manipulation, these forces, both good and bad, can be used in our favour or against us. So now that you innerstand the origin of Vampyr and the media’s sly way of communicating with us, let me ask you the same question my astute friend asked me:

Do you believe that there is a hidden message being portrayed in the media? Do you think it affects us? And if so, how?