The Fanciful Ballet of Politics

Koch Industries, the Wichita, Kan.-based company run by the billionaire Koch brothers (the same Jewish bankers that are aiding George Zimmerman after he slaughtered our son) : 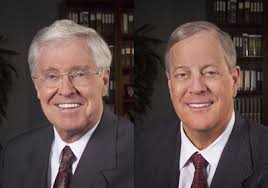 sent a voter information packet to 45,000 employees of its Georgia Pacific subsidiary earlier this month.

In it was a letter, dated Oct. 1, from Koch Industries president Dave Robertson implicitly warning that “many of our more than 50,000 U.S. employees and contractors may suffer the consequences” of voting for President Obama and other Democrats in the 2012 elections, a list of conservative candidates the company’s political action committee endorses and a pair of editorials: one, by David Koch, supporting Mitt Romney, and the other, by Charles Koch, condemning Obama.

“While we are typically told before each Presidential election that it is important and historic, I believe the upcoming election will determine what kind of America future generations will inherit,” Robertson’s letter–first published by InTheseTimes.com–begins. “If we elect candidates who want to spend hundreds of billions in borrowed money on costly new subsidies for a few favored cronies, put unprecedented regulatory burdens on businesses, prevent or delay important new construction projects, and excessively hinder free trade, then many of our more than 50,000 U.S. employees and contractors may suffer the consequences, including higher gasoline prices, runaway inflation, and other ills. This is true regardless of what your political affiliation might be.”

To help you engage in the political process, we have enclosed several items in this packet. For most of you, this includes information about voter registration deadlines and early voting options for your state. At the request of many employees, we have also provided a list of candidates in your state that have been supported by Koch companies or by the KOCHPAC, our employee political action committee.

I want to emphasize two things about these lists. First, and most important, we believe any decision about which candidates to support is — as always — yours and yours alone, based on the factors that are most important to you. Second, we do not support candidates based on their political affiliation. We evaluate them based on who is the most market-based and willing to support economic freedom for the benefit of society as a whole.

If you are concerned about our economy, our future and enhancing the quality of life for all Americans, then I encourage you to consider the principles of your candidates and not just their party affiliation. It is essential that we are all informed and educated voters. Our future depends on it.

It’s not the first time Koch Industries has sent employees political packets. Just before the 2010 midterm elections, Koch sent staffers an urgent mailer that the Nation said was “full of alarmist right-wing propaganda.”

Last week, David Siegel, the founder and CEO of Florida-based Westgate Resorts, sent an email to employees informing them that layoffs are likely if Obama is reelected:

It’s quite simple. If any new taxes are levied on me, or my company, as our current President plans, I will have no choice but to reduce the size of this company. Rather than grow this company I will be forced to cut back. This means fewer jobs, less benefits and certainly less opportunity for everyone.

So, when you make your decision to vote, ask yourself, which candidate understands the economics of business ownership and who doesn’t? Whose policies will endanger your job? Answer those questions and you should know who might be the one capable of protecting and saving your job. While the media wants to tell you to believe the “1 percenters” are bad, I’m telling you they are not. They create most of the jobs. If you lose your job, it won’t be at the hands of the “1%”; it will be at the hands of a political hurricane that swept through this country.

As Gawker noted, Siegel and his wife were the subjects of “The Queen of Versailles,” a recent documentary “about their ongoing quest to build the largest house in America.” And Siegel has often claimed credit for George W. Bush’s victory over Al Gore in the 2000 presidential race. (“I had my managers do a survey on every employee [8,000 total],” Siegel told Bloomberg BusinessWeek. “If they liked Bush, we made them register to vote. But not if they liked Gore.”)

Siegel and the Koch brothers are not alone in issuing anti-Obama missives to employees. According to MSNBC, Arthur Allen, chief executive of ASG Software Solutions, wrote a similar email to his staffers on Sept. 30:

Many of you have been with ASG for over 5, 10, 15, and even 20 years. As you know, together, we have been able to keep ASG an independent company while still growing our revenues and customers. But I can tell you, if the US re-elects President Obama, our chances of staying independent are slim to none. I am already heavily involved in considering options that make our independence go away, and with that all of our lives would change forever. I believe that a new President and administration would give US citizens and the world the renewed confidence and optimism we all need to get the global economies started again, and give ASG a chance to stay independent. If we fail as a nation to make the right choice on November 6th, and we lose our independence as a company, I don’t want to hear any complaints regarding the fallout that will most likely come.

In the email, Allen added: “I am asking you to give us one more chance to stay independent by voting in a new President and administration on November 6th.” {Recopied from Yahoo}

Bet I know what you’re thinking, “I don’t understand what this means exactly”. Let me explain.

Why would the same banking firm berate the very person they are funding?

When he wins again, layoffs will have to take place and more people will have hatred for the The Most Powerful Black Man on Earth with No Power. This is a game! Politics is nothing but a fanciful ballet…at your expense. Do not fall into the traps. Barack Obama was chosen for a reason. His skin colour being one of the main reasons.

33 thoughts on “The Fanciful Ballet of Politics”