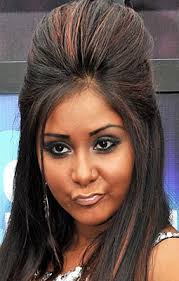 I don’t watch TV. And I mean hardly ever.  If there is something special I want to see then yes, I’ll turn it on but for the most part, my remote is dusty. I think back to childhood when TV was “family friendly” like The Cosby Show. Lessons were learned and idiosyncrasies were, for 30 minutes, challenged.

I want to blame MTV’s The Real World for starting this madness but something tells me this was a slow and painful process. After the network studios discovered that they could make a bloody fortune out of  the dumbing down of society, our very intellect, morale and soul would be for sale.

Last night, I finally turned on the Propaganda Machine and saw this:

It was a “pageant” show with an overweight mom telling her four year old to be more “sexy.” As I felt bile rise from my belly, I wondered why any mother would allow her child to be sexually exploited. With pederasty at an all-time high, predators putting ads on Craigslist to *ahem* meet children and the recent explosion of the Penn State scandal, I’m floored.

Is this what we’ve become? A mass of drooling, brainless, think-less consumerists who just wants to be entertained? What about the explicitness of our programming geared towards children? What does this say to our little girls? That they are nothing more than a pile of flesh. And what does this do to our boys? What messages does this send to them?

I said to myself, “Who would watch this? And why? And why are they in syndication? Who is the executive producer and why does he still have a job?” My mom says I think too much.

Is it really a wonder why AmeriKlan is mocked, stereotyped and hated? Is it really a wonder why other countries scream of our ignorance and hypocrisy? We promote violence and exploitation based on greed and everyone looks the other way…as if this is normal behaviour! Yet when it explodes in our faces, we look at one another with wide eyes, agape, and wonder what went wrong.

When will this mass hypnosis come to an end?

ok….my mind really can’t be blown anymore but, whatever…..thrill me.

Posted in Somethings wrong with the world and tagged America, american hypocrisy, American violence, pageant shows, Television in America, The end is near

34 thoughts on “The Stupidification of AmeriKlan”