How Little Black Girls Learn to Hate Themselves

Look at this and tell me if you had one growing up:

Chances are, you did. And so did I. Mine was called Ice Princess Barbie and she was beautiful. Long, golden hair, a pretty glittery dress with little white ice skates. I remember going to our favourite store, Woolworth’s, to find another doll that resembled me. There was none. (And, please, Cabbage Patch Dolls do not count). Later, with the demand for more realistic dolls for coloured girls, Mattel, in their graciousness, made this: 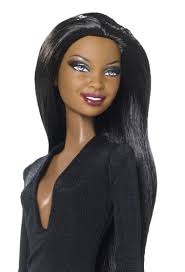 Now, allow me to point something out. Black Barbie looks STRIKINGLY similar to WHITE Barbie, no? As if the only way black women are to be recognized and created by an esteemed doll factory, we must be white-looking…but dipped in chocolate. When we complained, yet again, they shut us up by making her: 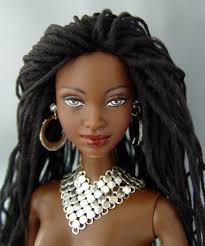 What messages does that send to little black girls in AmeriKlan, who are ALREADY beginning to realize that something is amiss?

1. That this country’s standard of beauty does not include you.

2. That AmeriKlan hates dark skin, round noses, full lips, coarse hair…which is everything that makes you who you are.

3. That in order to have a dollmaker realize that you even exist (40 million of us) you must look like a facsimile of a white counterpart…but with a skin hue that’s “not too dark” so whites won’t get offended. Therefore, my friends, this is not about you…it’s about pleasing them. The mind-fuck is relentless. It begins at an early age and lasts well into adulthood. That’s why so many black women hate themselves, feel unworthy of being loved, tolerate abuse from lovers and wear that hurt like a “chip on their shoulders.” By the way, this too is apart of “The Plan.” Self hate will take the lives of more blacks than the master’s whip and gun any day of the week.

Which brings me to my point: I personally do not care for Mr. Disney’s innocent female characters. He began to perpetuate the white damsel in distress since about 1937 with Snow White eagerly awaiting a kiss from her prince to bring her back to life. This too messes with the psyche of little white girls…but for now, I will focus on my people. Let me ask you something. And before you answer…just take a hard, long look at this picture:

Now look at this one:

Ok….take a minute to study both pictures.

Call me crazy( some already do ) but the Evil Queen, drawn in darker colours, a black cape, red-black lipstick and dark blue eye shadow, wants to murder a young girl, who is deemed prettier, so she can be “fairest in the land.” What subliminal message is this giving out to black and white girls? That “darker” women are envious of them, want what they have and wish to see harm come their way. See any similarities between 1937…and today’s world? I do.

More than you know…which brings me to my second point.

When I hear the tale of a white girl who threw acid in her own face and blamed a black woman who said, “Hey, pretty girl, want something to drink?”

And AmeriKlan begins to search frantically for this “evil black fiend”, which had many black women who sport a short-cropped hair-do to hide for fear of death or prison…only to realize that it was a lie to begin with…only to have the media turn around and comfort HER due to the fact that she suffers from a condition called “body dysmorphic disorder”…only to have everyone shrug it off and pretend that racism wasn’t a part of this…I sit back and think, again, about “The Plan.” Ask yourself this: Why was it so easy for everyone to believe that a black woman could do this? Because that’s how black women are portrayed in the world. Ugly. Devious. Envious of whites. And vengeful.

And we wonder why little black girls run to daddy and ask, “Am I ugly? What’s wrong with me?” For the sake of our children’s future and their sanity, please buy them dolls and action figures that look like us…if possible made by us. If we don’t break this chain of sickness, it may last another 400 years.

Posted in Racial injustice, Somethings wrong with the world and tagged black barbie dolls, Get over it, little black girl, supremacy, White Supremacy

67 thoughts on “How Little Black Girls Learn to Hate Themselves”