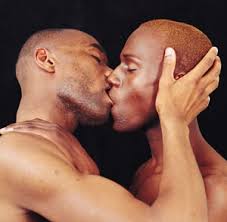 Ummmmm……….yes, it’s that kind of discussion today. Since God created Adam and Eve, men have lusted after other men. Yeah sure, the bible says, ” No, no….please don’t do that. That’s why girls are here,” but we know it happens in ALL cultures. But for some reason, when black men do it, it’s shocking, shameful and damaging to his career. It tears apart families and may lead him to suicide, drugs and being “down low”… all to have something that feels “right” to him but he knows society won’t approve of.

Why are gay black men shunned in black society? Let’s examine this……

Since we took that little boat ride, black men have been the epitome of sexuality, manliness and toughness. Every black man( and I suspect white men too) wanted to be John Shaft, a “big, black dick that’s a hit with all the chicks.” We see tall, strapping, young( and sometimes old ) black men with hordes of beautiful willing women who will do whatever they wish. Billie Dee Williams, in his heyday, was a smooth, chocolate brother that made the ladies swoon while convincing men everywhere that Colt 45 was the drink to be had. So if the black man, in all his sensual glory, could have any woman( black or white )he desired, why choose men? And why keep it a secret? Or worse…why get married, have kids and sneak out to rendezvous with your lover?

Even though AmeriKlan claims to be Puritanical in foundation( hahahahahaha!!!!! ), we blacks are usually raised in a deeply religious/spiritual home. We’ve heard the preacher talk about Allah, Jah, Christ or whatever name you have for Him. We are told about the sins of the flesh, why marriage between a man and woman is key. And that God hates homosexuals.

Being a man in AmeriKlan is hard enough but when you throw skin colour in the mix, then it becomes damn near deadly. One thought I have about why black homosexuality is so shameful is that we, as coloured folks, are taught that homosexuality is a “white man’s disease.” That’s why they flaunt their “illness” in public as opposed to hiding in the shadows. No self-respecting brother would ever “choose” this lifestyle over the one the bible says he must have. So it becomes taboo…a mortal sin…and of course, anything that is considered taboo becomes more desired.

Then there’s that shameful feeling that overcomes you when your family learns of your true nature. You’ve “let them down”. What will the neighbours think? Or Auntie Rita? Will they look at you the same way again? Will your cousin, the deacon, allow you to use his bathroom? And what about AIDS? Don’t ALL homosexuals carry the disease? How to explain to them that you are still that same young man who loves to fish with dad. You’re just gay.

Perhaps that societal pressure combined with familial pressure is why black men who love other black men stay hidden in the shadows….I don’t know. What I do know is, God loves ALL of his children, even the ones that stray or do bad things. If you are a gay black man in hiding…come out and see the light. Being black is hard enough. Why add another element to an already difficult existence?

Tell me your thoughts about this difficult subject.